‘Dude, Where’s My Car?’ On Its 15th Anniversary
A new perspective on the forgotten 2000 stoner gem.

There’s a moment toward the beginning of “Dude, Where’s My Car?” that makes the bromance classic worth remembering 15 years later. In pursuit of a missing car after a night of debauchery, two hapless stoners, Jesse (Ashton Kutcher) and Chester (Seann William Scott), dressed in matching Adidas jumpsuits, pull up to a stoplight to find Fabio -- yes, Fabio -- sitting in the car next to them.

"Dude, Where's My Car?" is by no means representationally sound. In fact, if anything, it's a demonstration of how few consequences white males face in our society. The exchange that follows, however, is an uncharacteristically progressive moment for a film the prides itself on its own stupidity.

Fabio makes the first move by placing his arm around his female companion.

Kutcher happily does the same with Scott.

And with little hesitation, Kutcher dives in for the most revolutionary spit swap in bromance history.


The moment barely registers for Kutcher and Scott's characters -- they high-five and drive away after all is said and done -- because “Dude, Where’s My Car?” is obsessed with gay sex. No, seriously, dude. Queering the forgotten gem of the 2000s era isn’t even a difficult task, considering the thinly veiled homoeroticism that underscores almost every interaction. If anything, the film requires extreme patience. You have to endure two whole minutes before someone whips their dick out.

What dude-brand comedies like “Bill and Ted’s Excellent Adventure,” “Wayne’s World” and “American Pie” have in common, besides schoolboyish humor and a place on every freshman’s dorm room wall, is a shared anxiety over homosexuality. Films belonging to the bromance genre unfold as an exercise in male posturing, using butt jokes and beer to stave off threatening notions of femininity and homosexuality.

Unlike their predecessors, however, the bros at the center of “Dude, Where’s My Car?” "see gender in quotation marks," as Michael DeAngelis notes in Reading the Bromance, adopting exaggerated gender roles that reflect the impact of gay sensibility on the dominant narratives of masculine heterosexuality. At almost every turn, the pair is confronted with the potential of homosexual relations and in select moments, like their open-mouthed make out, the film succeeds in challenging sexual boundaries.

As Jack Halberstam mentions in his masterwork The Queer Art of Failure, in the film's DVD commentary, Kutcher and Scott joke with one another, “Dude, we were so gay in this film, so gay.” They’re not wrong. For all intents and purposes, Chester and Jesse are basically boyfriends, sharing a love their twin girlfriends could never rival. As Michel Foucault once noted, "The development toward which the problem of homosexuality tends is the one of friendship,” and Chesse (let it happen) represents a spot on that spectrum because the two "live together ... share their time, their meals, their room, their leisure, their grief, their knowledge, their confidences.”

Actually, scratch that knowledge part. And yes, we just mentioned Foucault and “Dude, Where’s My Car?" in the same sentence. Mic drop.

The makeout is mostly memorable because of the nonchalance exhibited by Chesse once it's over. This feat is even more impressive considering the same-sex kiss takes place in the context of a film targeted towards predominantly straight young men in 2000. Kutcher and Scott have no issue locking lips, if it means besting another male in competition because the two are struggling to navigate the sexual boundaries of the new millennium.

As important as the kissing scene is to understanding the film's queer sensibilities, we are talking about "Dude, Where's My Car?" after all, Kutcher's launching pad to stardom and arguably one of the stupidest movies ever made. In many instances, the film fails to make the mark, drawing broad ignorant strokes when it comes to characters that challenge social norms.

On one of their many stops on the road to recovering their car, Chester and Jesse become entangled with a stripper, who identifies as "a gender challenged male" and can change their voice at the flip of a coin. Under the guise of giving him a lap dance, the stripper takes Jesse into another room where they reveal their penis, causing one half of the stoner duo to cry in disgust, "Dude, you're a dude!" and run screaming from the club. Dramatically lowering the character's voice to elicit laughs and reducing the trans experience to one's genitalia are not only boldly offensive representational choices, but also undermine the film's previous moments of progressiveness.

In another interaction, the stripper and their transgender boyfriend passionately kiss, in front of Chesse, eliciting this response from Chester: "Are we supposed to be grossed out by this, or ... ?" Although featuring two trans people in love is rare even by today's standards, the film bungles any semblance of representational credibility in the scene, putting trans people as the butt of every joke. Stuck in the middle of this tangled sexual web, once again, are the film's two leading men, both threatened and intrigued by the people standing before them.

For all of its missteps, "Dude, Where's My Car?" was deeply in tune with cultural climate at the time. The early 2000s was the age of the "well-meaning" stereotype on screen, where gay characters swished and queerness was the still ultimate other. However, it's hard to deny that some of these moments were groundbreaking. "Will & Grace" entered its third season only months before the film's release, while "Dawson's Creek" featured the first kiss between two male characters ever to take place on primetime television that same year. Chester and Jesse, just like the rest of mainstream America, were wrestling with ﻿﻿their own questions of sexual identity. 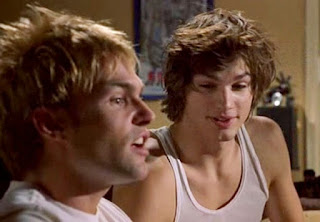 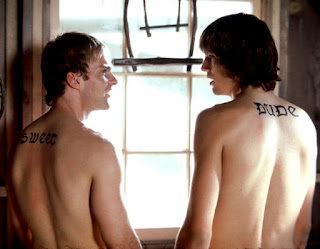 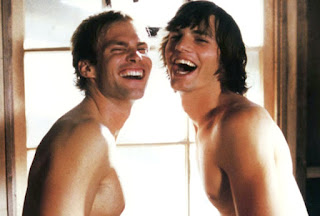 YEAH, YEAH, YEAH, WRESTLING WITH SEXUAL IDENTITY AND ALL THAT. WHAT'S WRONG WITH JUST WANTING TO MAKE OUT WITH YOUR BRO?!?!?