How do I miss these things?! 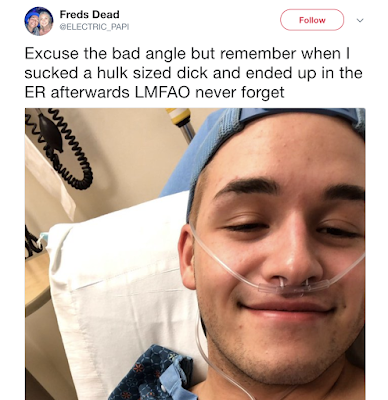 Within each generation, a rising class of heroes arrives. Fredy Alanis, a 19-year-old legend who hails from the Chicago suburbs, is one such hero — or he has become one, at least, to thousands of people on social media, who have eagerly spread his tale of how a fated interaction with a ten-inch penis landed him in the hospital.
According to Alanis, his airway was ruptured in January during a Grindr hookup, in which he “sucked a hulk-sized dick,” as he put it, and wound up in the ER. Radiating Big Dick Energy (which is more than a little ironic, I suppose), he then snapped a selfie from the hospital bed. Alanis didn’t post the now-legendary photo until July 5, seven months in which the world sat deprived of a story of true resilience.
Alanis, now fully healed and able to give interviews over the phone, talked with them. about the experience of going viral on the internet and being inducted into the Gay Hall of Fame.
First of all, how did you meet this well-endowed man?
He’s my old neighbor who I found on Grindr. He’s, like, four years older than I am, so I knew who he was, but we never hung out or anything before.
What did it feel like when your airway ruptured?
After everything had happened, I felt it was just this soreness in my chest. Nothing really hurt that bad. I thought, maybe my chest is just sore from what took place, and I didn’t think anything of it. I woke up the next morning, and the pain was still in my chest and it was sharp. I was hunched over and crying.
Did you immediately tell the doctors what had happened?
No! Because afterwards I was kind of confused more than anything. When I went to the doctor, when they said there was a rupture in my airway, they said the only thing it could possibly be was last night.
But you still didn’t tell them?
I didn’t tell them exactly what happened because my mom drove me to the hospital. I told my mom that the night before I was violently coughing. I had to pull something out of my ass really quick to cover it up. I was in the hospital for three days. I felt like, eventually, I had to tell the doctors exactly what happened to be treated the right way. It was January 3rd, so I was starting off the new year in the hospital.
Have you told your mom the details yet?
No. I haven’t told my mom. My post has made it to Facebook and I guess it’s circulating there, so it’s a matter of time. I have accepted the fact. I have to let them see it on their own.
Do your parents know you’re gay?
They do. They just don’t know I’m a whore.
When did you post this story on Twitter?
I actually posted it three nights ago or four nights ago. It was, like, I was just making it as a joke about me to my friends who knew about it. I didn’t think a bunch of people would retweet it and like it. It blew up. It wasn’t my attention my intention at all.
What has the feedback been like?
The feedback has been nuts. I’ve gotten people, homophobic douchebags, messaging me and telling me to gas myself.
But besides that, I feel like everyone on Twitter has thought it’s funny. They say I’m iconic and a legend. They’ve said I’m their leader. They’re posting some crazy ass comments and honestly I’m just going along with it because I’ve never experienced anything like this before.
You are kind of legendary for this.
I am a huge inspiration. Don’t play too rough, though.
Tell me about your life, girl. What’s going on with you now?
Right now I’m driving from work because I’m a server. I work like five out of the seven days of the week living off my tips. Otherwise, if I’m not at work I’m in Chicago, going to the beach and hanging with friends. That’s it. Or I watch my reality TV shows. Literally all the Real Housewives. I watch Big Brother and those competition game shows. Anything on BRAVO.
Have you seen the guy since?
I’ve actually seen him since then. I saw him two weeks ago, I’m not even going to lie. I told him what happened and since then when we decide to hook up or whatever he is a lot less rough. He’s more cautious and aware of what he’s doing. I don’t want to be in the hospital! He told me he felt so bad. He works in an ambulance so he’s pretty aware of the human body and what’s possible. I was texting him on my way to the hospital and I said my chest is really hurting and he said he hoped he didn’t cause it because he knows it’s possible.
I did not know this was medically possible.
The chances of it happening, and the fact that it happened is insane because the doctor told me getting the airway ruptured through oral intercourse is one in millions, maybe hundred millions.
Wig. You said you finished him off even after you knew something had happened. Is that true?
Yes. I wasn’t gonna stop. In the heat of the moment my will power willed me to continue. Stamina.
https://www.them.us/story/he-sucked-a-10-inch-penis-then-ended-up-in-the-er-his-story
Posted by SteveXS at 7:12 PM

This guy...I'm speechless. What a Trooper.