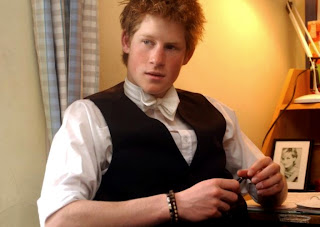 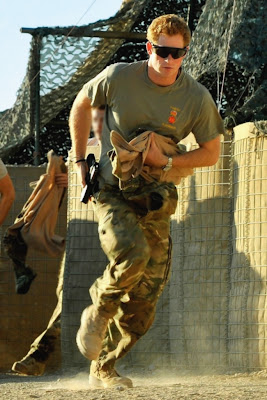 Prince Harry to homophobic soldiers: ‘Back the f--k off’
Capt. Wales stands up to gay-bashing soldiers targeting one of his men, new memoir claims
BY DEBORAH HASTINGS / NEW YORK DAILY NEWS

New memoir by James Wharton titled “Out In The Army: My Life as a Gay Soldier,” describes Prince Harry protecting an openly gay soldier from being beaten by homophobic rival regiment members.

Britain’s Prince Harry came to the defense of an openly gay soldier under his command, saving him from being beaten by homophobic members of a rival regiment, according to a new memoir.

In James Wharton’s “Out In The Army,” the former lance corporal describes how the Royal defended him in 2008 during war training exercises in Canada.

Six soldiers from a rival regiment had threatened to ambush him because he had relations with a fellow infantrymen, the book says.

Wharton went to Prince Harry, his tank commander, who later confronted the soldiers and told them to “back the f--k off,” Wharton says in his book, according to several British reports.

Wharton recounts the conversation with his commanding officer this way:

Harry instantly looked concerned. I told him: 'I think I'm about to be murdered by the infantry.'

I climbed into the turret and talked Harry through exactly what had happened. He had a complete look of bewilderment on his face.

I didn't hold back: I told him everything that had gone on. I couldn't stop the tears from welling up in my eyes.

Harry climbed out of the tank and started having a go. I worried he was about to make the whole thing worse, but he wasn't holding back. Prince Harry was sticking up for me and putting a stop to the trouble. I had been on track for a battering and had been rescued.

He came back ten minutes later and told me the problem had been 'sorted'.

He told me: 'I knew one of his officers and we cleared everything up. I also told those other lads to back the f--k off, too.'

The book, scheduled for release on June 24, is published by Britain’s Biteback Publishing.

He rose through the ranks while serving in Iraq and Afghanistan, and later trained as an attack helicopter pilot.

Capt. Wales, as he is known, returned from a 20-week mission in Afghanistan in January.