When did it stop being OK for men to hold hands? 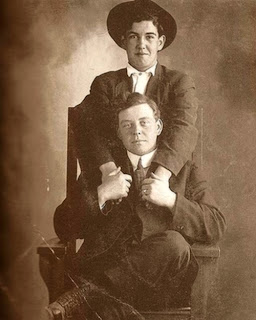 Two middle-aged men with paunches popping through their waistcoats and facial hair rustling their cravats look fixedly out of the sepia-tint of a nineteenth century photo. They resemble prospectors – men of furrowed brow, pinched skin and stoic demeanour. Except one crucial detail: to modern eyes these men look like gay lovers. Their arms and legs are entangled and one man is partly straddling the other. They’re like a couple in the first flushes of love, overwhelmed by a compulsion to be as physically close as possible. They could be Brokeback Mountain, if Ennis hadn’t a quit Jack.

But according to John Ibson, the author of Picturing Men: A Century of Male Relationships in Everyday American Photography, the men I described were most likely just friends. They join an extraordinary collection comprised of 144 photos from 1850-1950 of businessmen holding hands, sailors gazing longingly into each other’s eyes, miners waltzing, basketballers nestling into each other’s crotches and teenage boys dressed in swimsuits draped over each other’s torsos.

Ibson notes that these men could have been gay, but most probably weren’t. In fact, the thought probably never crossed their- or anyone else’s- minds. No-one, he claims, would have batted an eyelid at the sight of two men going to a photographic studio to have their photos taken together in various states of passionate embrace. Back then it was socially acceptable for men to be publicly affectionate towards one another in a way that it isn’t today.

So what went wrong? How did white/western men go from frolicsome fraternities to mute masculinity? How did we crash from the love-song of male friendship to the homophobic clamour of the empty seat between men at the cinema? Why does an early twentieth century photo of footballers show them amorously folded one on top of the other while a late-twentieth century picture would show them perched upright, hands on knees, legs forming a bodily barricade?

And the more threatening homosexuals appeared the more that male bodies drifted apart. A chill wind swept through male friendships. Heterosexual men became careful not to send messages that they could be gay. Paranoia replaced public affection.

Real men – heterosexual, courageous and physically strong – were defined against other forms of masculinity. Where real men were emotionally wooden, gay men were like burst water valves: expressive, flamboyant and potentially contaminating. And in the face of this new threatening identity, ‘real men’ erected fearsome bodily barriers to keep their own dangerous desires in and the desires of other men out. Sitting on your friend’s lap or holding his hand was now a perilous activity. Post-1950, emotional suppression became crucial to the maintenance of patriarchal power.

Of course this is not in all areas of life. Men were and are still allowed to weep, hug, caress, and touch each other’s bottoms while fighting in war or playing violent sport. This may be because these are such unquestionably masculine activities from which women have been firmly excluded. And in popular culture there are still limits on how far they can go. Think about the friendship between Archie and Frank in the film Gallipoli. Archie’s too much of a beautiful fop and their friendship is a little bit too close. As a symbol of failed masculinity and suspect friendship, Archie has to be killed off so that he can be reincarnated as a sexless, dead, war hero. Kind of in the same way that tom boys have trees fall on them once they hit puberty in classic Australian teen fiction (think Judy in Seven Little Australians) before they can blossom into glorious lesbians.

Another possible reason for the decline in expressions of man-on-man-love is the entry of women into the public sphere. The photos in Ibson’s collection were taken during a time when life was incredibly gender segregated. Your primary emotional identification was with people of your own gender which meant that friendships were more intense and possibly more loving. This may also explain why it’s common to see men in certain more gender-segregated countries of the Middle East, South Asia or Africa holding hands, although Ibson speculates that this could be because homosexuality has not had the same historical trajectory there as in the West. By which he means that the pathologised identity of the homosexual does not exist there as it did here.

But what ‘here’ are we talking about? Ibson’s photos are of Americans. Can we chart the same decline in Australia? From my doctoral research into the early nineteenth century I can tell you that men had wonderfully passionate friendships. Remember Bass and Flinders? What your Year 7 teachers didn’t tell you is that these two lads had a lot of manlove. Listen to Flinders writing to Bass: ‘There was a time when I was so completely wrapped up in you, that no conversation but yours could give me pleasure; your footsteps upon the quarterdeck over my head took me from my book and brought me upon the deck to walk with you.’ Flinders knew when sending this letter that it could be (and was) opened by any number of acquaintances. His words quite simply, were not considered suspicious.

And the future? Sociologists say young boys are more likely now to greet each other with a hug and Gen Y is renowned for its acceptance of homosexuality. Does this mean that we can expect to see a male version of the opening first season of Girls where two friends wake up in each other’s arms? Is bromance a cultural validation of male intimacy, or is it just another way of saying ‘NOT GAY’? Or ‘GAY’? Will straight men ever again hire photographers to document their affection? Hopefully. Let’s keep our fingers crossed… and arms and legs affectionately interlaced. 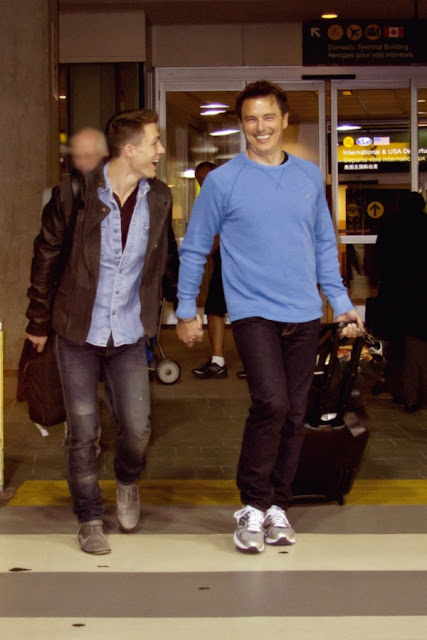 You know, you'd think that if the men in Europe and the Middle East find it acceptable, we would as well.

Merry Christmas; hope you have a wonderful day!